General SQL Parser is a package that enables you to add powerful SQL functionality to your applications.

Toolsverse offers permanent 5% discount on all Gudu Software products. Read about, download and try all versions of the General SQL Parser from either web site but if you buy it from our e-shop you will get a 5% discount + great support directly from Gudu software.

About the General SQL Parser

Adding a home-grown SQL parser to your applications is a difficult problem. Not only is decoding SQL grammar difficult, but database vendors are constantly releasing new versions of their databases. Maintaining your own SQL parser is time-consuming, error-prone, and costly.

Gudu Software has developed a SQL parser that simplifies decoding SQL grammar  and helps your applications stay current with the latest versions of database programs.

The General SQL Parser  is a package that enables you to add powerful SQL functionality to your applications. General SQL Parser offers a custom SQL engine for many widely-used databases, including a query parser for SQL Server, Oracle, DB2, MySQL, Teradata, Sybase, Informix, Netezza, PostgreSQL, Hadoop Hive and Access databases.

Using the General SQL Parser  library, you can save hundreds of hours of development time, improving your applications and speeding them to your customers.

The General SQL Parser  solves many common and difficult SQL development problems, including the following:

With our vendor-specific offline SQL syntax  check, you can validate SQL syntax without connecting to the database server. Syntax errors can be found even before executing SQL on your production database server. This is especially useful if your SQL was dynamically built based on user input. Supported databases include Oracle  (PLSQL), SQL Server , DB2 , MySQL , Teradata , Sybase, Informix, Netezza, PostgreSQL, Hadoop Hive and Access databases.

You can easily integrate our SQL formatter into your application to generate a color-coded, professional, and intuitive SQL layout that gives your product a professional look and feel. Our highly customizable SQL formatter offers more than 100 format options, including text, HTML, and RTF output.

We know how difficult it is to build a flexible and stable SQL formatter. If you need to support more than one SQL dialect – such as Oracle , SQL Server , DB2 , and MySQL – then this library could be the smartest investment you ever make, saving you hundreds of hours of coding.

Worried about being vulnerable to SQL injection  attacks on your ASP.NET  or Java  applications? Our operational library automatically detects malicious SQL segments .

Precisely determining and renaming every table and column in stored SQL statements that include considerable nesting sub-queries is a complex procedure. Using the General SQL Parser  can make this tedious procedure hassle-free for you, so that you can easily:

How the General SQL Parser  works

Not only do we provide the libraries. We also offer a wide range of free demos  that you can copy and adapt to solve your specific problems.

Below is the high-level architecture of the General SQL Parser.

The Yacc  Parser  reads the source tokens of each SQL statement. If no syntax  error is found, the Parser creates a raw parse tree , based on the BNF  of different dialects of databases. Otherwise, the syntax error is detected. A syntax error in one SQL statement doesn’t affect others. 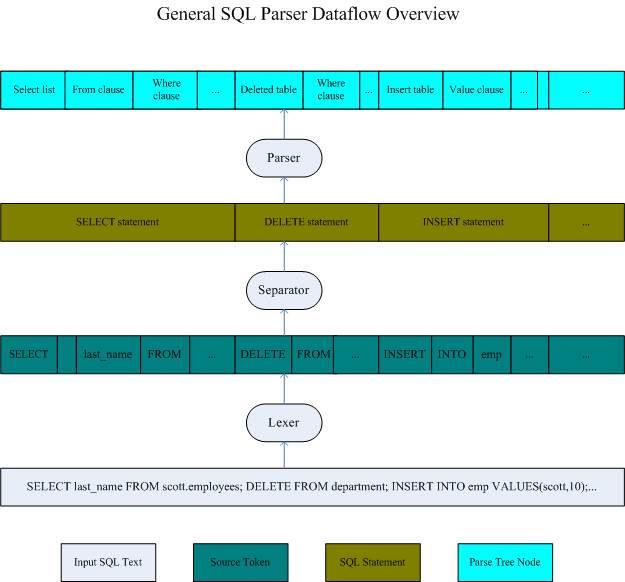 The formal parse tree  has a variety of uses, such as the following:

Many other uses depend only on your requirement and imagination.

Comparing the General SQL Parser to other products

When comparing the General SQL Parser  to other products, consider the following points:

Please let us know what product, supported databases (Couchbase, Hana, Mdx, Oracle, SQLServer, Dax, Hive, MySQL, PostgreSQL, Sybase, DB2, Impala, Netezza, Redshift, Teradata, Greenplum, Informix, Openedge, Snowflake, Vertica) and the type of license you'd like to purchase by filling out our Contact form below. We will send you a secure link to complete your order. We accept all major credit cards via the award-winning payment processor fastspring.com.